I have developed the spider rig and created controls and joints to allow for different levels of control in each part of the spider’s anatomy. This can help animate to a higher level of detail and accuracy. 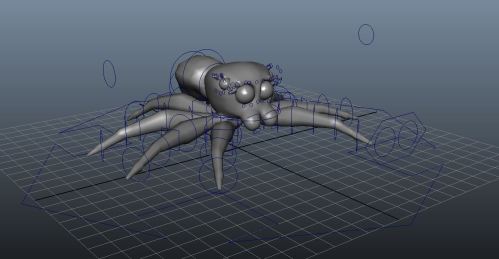 Currently, I have set a joint-based system for facial controls, as my spider will not be showing much emotion throughout the animation, as I hope to keep it’s base emotion to be rather blissfully oblivious and clueless. However I may move over to a nerve-based system should this method encounter difficulties in the animation. 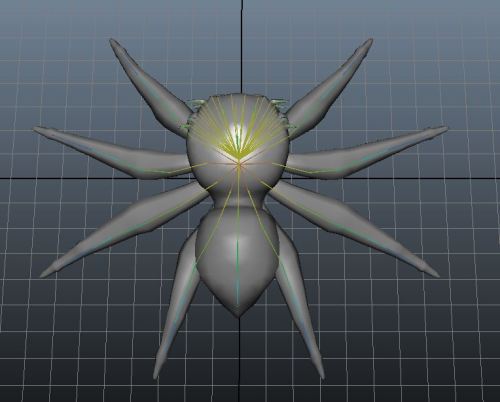 Following critique, it was suggested that I remove one of the scenes from my animation, as it did not read as clearly as my other shots. This would also allow me to focus more on the other scenes in my animation and improve them further.

The shot in question was the ‘toilet’ shot, when the girl attempts to use the toilet, however the spider is on the toilet roll and catches her off guard.

It was particularly recommended that I removed this scene because of the ending of this scene, was the audience struggles to read what is happening because of the angle of the camera, and also because of how she reacts, as we do not actually see her leave the room, which means that the shots where we see her re-enter the room after this make less sense.

Above is a link to my completed blocked animation for my animation project. This includes the conclusion, and a few refinements made as suggested by my supervisor and peers.

My initial model had a different texture that consisted of a more plain and brighter colours. It lacked the additional segment on the back of the spider (the abdomen).

During a supervisor session, several changes were suggested to help enhance the appeal of the spider.

I was able to create a model that I felt was suitable for the animation. After critique from my supervisor and peers I added various different parts to the model to both make it more like a spider, and more innocent and cute looking, such as large eyes and coloured patterns.

During one of our lectures, we had a guest speaker coming in to talk to us about how they create clothing for feature films. During this he demonstrated creating clothes using ‘Marvellous Designer’, which whilst it is used primarily for the fashion and clothing design industry, is also becoming increasingly used in animation because of it’s ease of use and level of detail and customisation.

We learned here that clothing is often best added to characters during the final stages of production, when the animation is more polished.

Our supervisor, Penny, also encouraged us to try and add custom clothing to our characters, as this is a feature that large animation companies look out for in animation reels, as it adds an additional level of detail and customisation to a story, that shows extra effort and detail.

I hope to use marvellous designer to create custom clothes (perhaps a bathrobe) further down the pipe-line of my project.

As per feedback received from my peers during our weekly meetings with our supervisor. I was encouraged to add some additional shots in my current animation to help the story to make more sense, and to allow the viewer to follow the direction and location of the protagonist more.

For example, this shot was suggested to be added after we see the main character open the door and walk into a room. This is to help inform the viewer that our character is walking into a bathroom, and to help make her actions and behaviour make more sense.

Over the holidays, as we are no longer in term-time, I hope to progress my animation further in my own time. There are still various important elements of my animation that need to be completed. This was also discussed in my project review presentation, before we broke up for the Christmas holidays.

I have blocked out the initial phases of my animation, these focus on establishing the ‘flight’ response of the girl protagonist. The final scene to block with be the conclusion, where we see here ‘fight’ response kick in, after being pushed too far.

Following my progress review, carried out in the form of a presentation to my supervisor and the rest of the students she was supervising, I received feedback on elements that I should look into further to help my animation.

As my animation is trying to tell a story without dialogue, my animation will be drawing heavily upon other aspects of storytelling to help enhance the story and allow it to make more sense to the audience.

Therefore I have had to pay particular attention to cinematography in my animation. This will allow the animation to be read more easily and help it to make sense to the audience. It will also be helpful to help enhance the sense of fear that the girl fears, and contrast it with the actual reality of the situation (she sees a terrifying creature, whilst in reality it’s just a cute harmless spider trying to find a comfortable home). 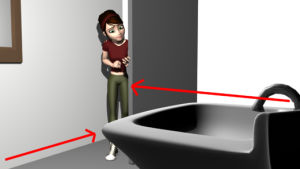